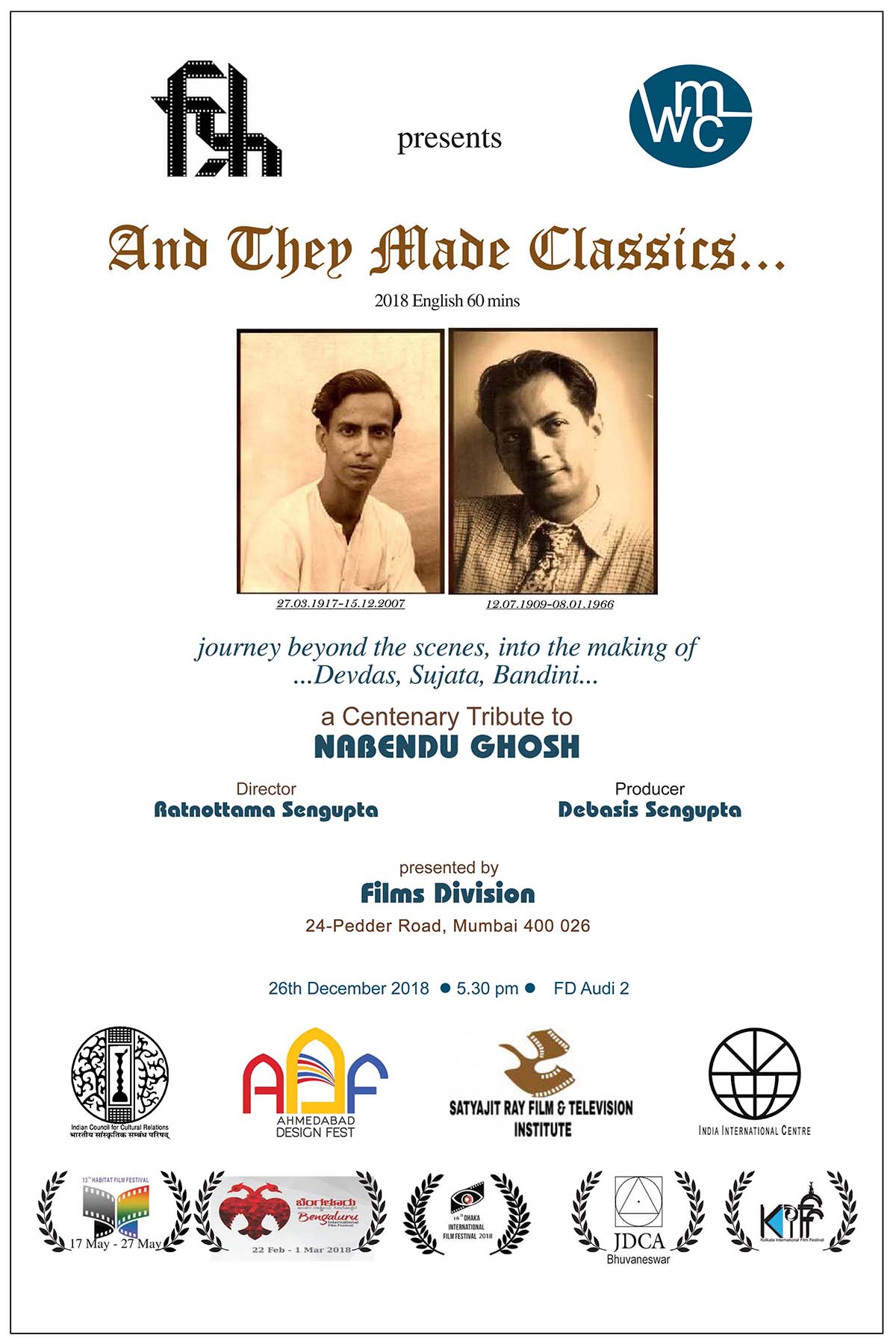 Films Division in association with Ms. Ratnottama Sengupta & WMC is organizing a special screening of the film “And They Made Classics” directed by Ratnottma Sengupta, daughter of Bengali litterateur and screen writer Nabendu Gosh. The screening will be at Audi-II Theatre, New NMIC Building, Films Division, Mumbai at 5:30pm on Wednesday, 26th December, 2018. Please find details and poster of the film as attached for publishing/listing in the UNWIND page of Mumbai Mirror dated 26th December, 2018.

In 1951, when the celluloid master went to Bombay to make ‘Maa’ for Bombay Talkies, he took the Bengali litterateur turned screen writer in his team. And in 1964 the director’s last film Bandini, that won a silver trophy at Karlovy Vary, was scripted by screen playwright Nabendu Ghosh. In between they had created such timeless classics as Baap-Beti, Parineeta, Naukri, Biraj-Bahu, Devdas, Yahudi and Sujata.

How did the writer-director duo work? And what made their unique association work? ‘And They Made Classics’ goes behind the scenes with an interview with Nabendu Ghosh that was taken by Joy Bimal Roy in 2005, as he prepared to make ‘Remembering Bimal Roy’. Ratnottama Sengupta revisits the stories in a Centennial Tribute to Nabendu Ghosh (27 March 1917 – 15 December 2007).

An additional layer of the film has the writer’s colleagues such as Hrishikesh Mukherjee, Nutan, Dilip Kumar, Sunil Dutt and Gulzar, and students such as Jaya Bachchan, Saeed Mirza, Girish Kasaravalli, Ravi Ojha and Vikas Desai talking about his art and his contribution to moulding the New Indian Cinema. This makes this Centennial Film a storehouse of information, anecdotes, and comments of archival value.

“And They Made Classics…” produced by Dr. Debasis Sengupta, has so far been screened in six international film festivals, in Kolkata, Dhaka, Bangalore, Bhubaneswar and Delhi. This is its first screening in Mumbai – the karma bhoomi of the writer and his filmguru.

Director will be there to present the film and interact with the audience.

Screening is open to all and first come, first seated.