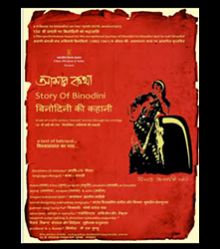 A documentary on the life and time of Nati  Binodini (1862-1941), The pioneering Bengali Stage Actress and the first South Asian Actress to write an autobiography; celebrating her 150th year. A video journey into early days of Bengali theatre, its history and development; It’s politics with questions of gender and sexuality in the 19th Century seen through the eyes of an “ABhadramahila” – outcast actress based on her autobiographies ‘Amar Katha’ and Amar Abhinetri Jibon; tracing the gender history…role, position and representation of women in Bengali theatre through Binodini’s writings.