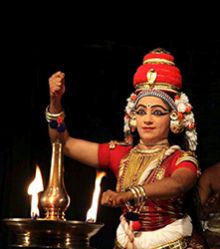 The film sketches the creative life of the protagonist Kapila. The film’s narrative is structured as one day in the life of a Koodiyattam performer. The film starts at dawn, by capturing the eye-movement rehearsals Kapila does with her father. The eye-movement rehearsals are rigorous eye exercises and throws light on the advanced acting techniques deployed within the art form. The film also captures the voice rehearsals Kapila goes through every day to train her voice to attune it to the art’s conventions.All these take place at “Nadanakairali”, which is the dwelling place of her parents, which also functions as a training and research institute for the art form. The film captures glimpses of Kapila’s father teaching certain performance to students and Kapila herself witnessing this, and his contribution to the art by a recording of the mudras/hand gestures involved in it. It also captures Kapila’s mother who has made a song out of these mudras/hand gestures and teaches them to students. The film follows Kapila through the noon, through interaction with her troupe members and dancing lessons she gives to students of a younger generation.