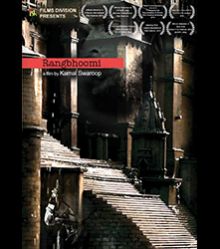 Rangbhoomi follows the film maker as he attempts to trace the contours of Dada Saheb Phalke’s life in Varanasi, where Phalke withdrew – disillusioned, from the world of cinema and decided to take up theatre. During his life in Varanasi, Phalke wrote a semi-autobiographical play titled “Rangbhoomi” which forms the core of this cinematic exploration. Set in the visually thrilling landscapes of the old town of Varanasi, the film intertwines the personal engagement of Kamal Swaroop with the story of Phalke’s journey and the play, deploying a vibrant palette of sounds, sights and characters in a surrealist juxtaposition.