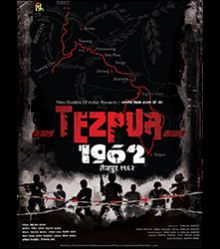 This documentary is based on the situation that prevailed In Tezpur at the height of the Indo–‐China Warof1962.It also trails the contribution made by some individuals who despite being tempted to leave guard and flee for fear of life, held their ground for the greater interest of the people of Tezpur. The documentary has made a poignant presentation of the selfless service provided by the erstwhile YEO (Youth Emergency Organization). It took a tremendous effort to collect the strewn threads to weave this saga of sacrifice and despair.The documentary gives a vivid sketch of Tezpur, a small town in central Assam which was caught unawares as the 1962 war between India and China took an about turn. The civil Administration was completely paralyzed and security forces left the town and its people to fend for themselves. With no other option left, the people Tezpur began to evacuate the town leaving behind everything they owned. In fact, it is the only town of independent India which was evacuated for fear of war.Tezpur would have been a different story altogether had not the Chinese announced unilateral ceasefire to the immense relief of the political leaders of India and most importantly for those people who put up a brave effort to stay back in Tezpur. ‘Tezpur–‐1962’ is a tribute to those civil soldiers and unsung heroes who took up the mantle of vigilantes despite having no defence resources at hand and also unsure of the consequences in the face of a massive onslaught by the Chinese on the verge of usurping Tezpur.