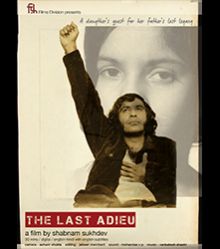 The need to resolve the unfinished relationship with her father who had died suddenly when she was only fourteen, Shabnam decides to confront her mother and talk to all the people who had known him.  She is eager to fill the holes in her sketchy memory only to find out that he had always been there with her and influenced her at every stage in her life without her knowing it.

After thirty years she is now ready to claim her father as she discovers his significance in her life.

The Last Adieu is a personal quest of a filmmaker daughter to unravel the past and make a connection with her filmmaker father, S. Sukhdev, who died suddenly at the age of 46, leaving behind a huge body of work and an unresolved relationship with his daughter.

While he was an accomplished filmmaker in the public eye, his family had another story to tell.   With the help of archival audio recordings, old photographs and Sukhdev’s films, Shabnam endeavours to construct a picture of her father as she struggles to love and respect him for who he was.

The film is an important record  of a phase in documentary history that inspired and paved the way for the new wave in non-fiction narratives,  and pays homage to S. Sukhdev, an important filmmaker who revolutionized Documentary filmmaking in India in the mid 60’s, right through the 70’s.